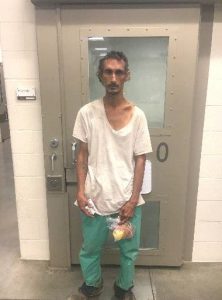 La Grange, CA – A man in custody on a quarter-million dollars bail is charged with igniting a suspicious wildland fire.

As reported here, the fire broke out early Saturday off Highway 132 near Lake Road. CAL Fire officials state that the call came in around 5:30 a.m. and the incident’s location was 1.3 miles south of the highway near the community of La Grange. The blaze, which burned about three acres of grass and oak woodlands, was determined to be arson.

Using a suspect description provided by a witness, officials and employees of a nearby ranch searched the ranch property and located a male, 45-year-old Nassar Albadwi, subsequently detained and interviewed by CAL Fire law enforcement officers.

Albadwi, arrested for arson to wildland, was booked at the Stanislaus County Jail. CAL Fire Tuolumne-Calaveras Unit (TCU) officials add that they thank the witnesses involved for their assistance in identifying and locating Albadwi.