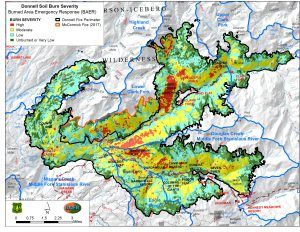 Tuolumne County, CA — The Stanislaus National Forest reports that six percent of the soil in the Donnell Fire footprint burned at a high severity and 32-percent at a moderate severity.

Those were the findings of the Burned Area Emergency Response Team (BAER) that has been studying the impacts of the fire. The areas of high and moderate burn severity are most susceptible to mudslides and flooding during the wet winter months. A new map put out by the BAER team shows that some of the hardest hit regions are near Arnot Creek, Brightman Flat, Disaster Creek, Dardanelle and Peaceful Pines. When a fire burns hot into a soil it changes the properties and has less cohesiveness, making it more likely to erode when rain hits.

Meanwhile, the northwest area of the fire, near Spicer Reservoir, has more of a “mosaic” where it burned at much lower severity.

Various treatments are being looked at to help prevent flooding in high risk areas. Some will be carried out by Forest Service staff, while others may be contracted. There is an urgency to get as much work done prior to the arrival of heavy precipitation as possible. 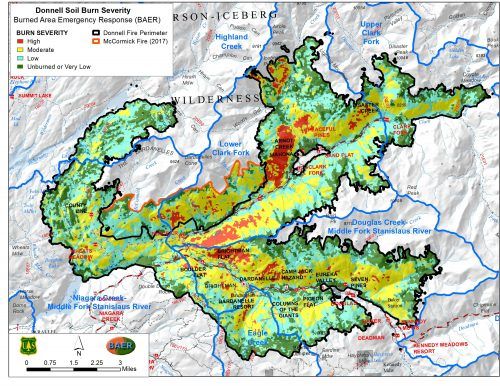