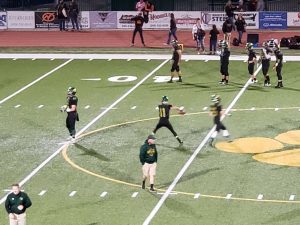 Crosstown rivals met on Friday night at Dunlavy Field with Sonora coming away with a 39-7 win over the Summerville Bears.

On the opening kickoff, Summerville’s Justin Roberts took a reverse hand off, broke one tackle, and went 85 yards up the sideline for the score only seconds into the opening quarter. With the extra point by Christopher St. John the Bears took an early 7-0 lead. The Wildcats would get the ball for the first time and start marching down the field when Quarterback Jake Gookin would keep the ball and go 57 yards for the score after dodging Bear defenders. Kicker Bryan Wynne would add the point after and Sonora would tie the ballgame at 7-7. Late in the first quarter, Wide Receiver Evan Bearden would use his height advantage and haul in a perfect Gookin back shoulder fade pass from 7 yards out. The kick after would be just wide to the right side and Sonora would take a 13-7 lead at the end of the first quarter.

The Wildcats and Bears would showcase defense throughout the third quarter. Sonora would grind out a long offensive drive capped by Running Back Elijah Macdonald, who until recently played on the offensive line, plunged in from two yards out making it 25-7. As Sonora lined up for a two point conversion, the Bears again would stuff the attempt and no points would be added to the scoreboard for the rest of the third quarter.

The physicality of the game would continue in to the last quarter as scoring would be scarce. Noah Cashman, Tres Machado, Jamie Macdonald, and Mike Litzler would all have their names called on multiple tackles for the Bears all night and would carry that into the fourth quarter. Sonora would finally grind out a possession highlighting Running Back Dalton Tarter up the middle and Jake Gookin would take it from less than a yard out.  Wynne would split the uprights taking the score to 32-7, Sonora’s advantage. As the Bear’s Brocchini was starting a drive, a big hit on the Summerville back would cause the ball to fall out, take a bounce straight into Macdonald’s hands and he would score from Sonora’s defensive side from 4 yards out. Wynne would add the extra point extending the Cats lead 39-7, which would be the final score.

As time ran out and both teams shook hands and met with their respective teams, as those huddles would break up, the white Summerville away jerseys and black home jerseys of Sonora started to filter toward midfield where friends that have played against each other for years would exchange hugs and handshakes after a hard fought battle.

The Wildcats will play next week, although it is currently unknown where the game will be played and against what team. The California Interscholastic Federation (CIF) Sac Joaquin section brackets are expected to be released this afternoon.

In other action last night, it was the battle for the bell, as Bret Harte High School played rival Calaveras, who won 47-27 claiming the ceremonial bell for the next year.