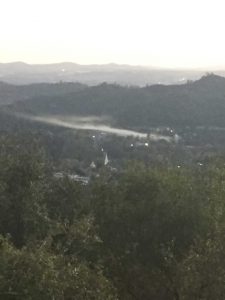 Update at 7:20 p.m.: Sonora Fire Department officials report that the flames broke out in a single unit of the Mark Twain Apartments located in the 300 block of Fairview Lane, off of Stockton Road in Sonora. Although the fire has been extinguished in that apartment, fire officials detail that firefighters are currently checking to make sure the flames did not spread to connecting apartments. Crews will remain on scene mopping up for a couple of hours. There is no word on damage to the structure at this time. Further details on the blaze is below.

Update at 7:10 p.m.: CAL Fire reports that crews have knocked down the flames the broke out in a building at the Mark Twain Apartments in the 300 block of Fairview Lane, off of Stockton Road in Sonora. All incoming resources have been called off the scene. CAL Fire reports that investigators are on scene and actively trying to determine what ignited the fire. It is still unclear as to exactly where the flames broke out or whether any there were any evacuations.

Original post at 6:50 p.m.: Sonora, CA – Fire resources are on the scene of a blaze at an apartment building in Sonora.

CAL Fire report that when firefighters arrived around 6:30 p.m. smoke was coming out of one of the buildings at the Mark Twain Apartments in the 300 block of Fairview Lane, off of Stockton Road in Sonora, near the Tuolumne County Superintendent of Schools building. CAL Fire could not confirm whether any residents had been forced to evacuate. We will bring you more details as soon as they come into the news center.