Couple Arrested In Connection To String Of Burglaries 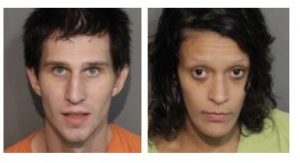 Angels Camp, CA — Two Angels Camp residents are behind bars suspected of being responsible for the burglary of an antique store we reported about on October 3, as well as theft from another business, and at least three thefts from vehicles.

All of the reported incidents occurred in Angels Camp. An investigation led to the arrest of 24-year-old Jarad Sullivan and 26-year-old Sydney Sullivan. An investigation is ongoing and the victims are being notified about the recovery of the stolen property.  They were arrested after being located in the 700 block of South Main Street and booked into Calaveras County Jail.

No additional information is immediately available.