Update: Massive Power Outages In Calaveras And Amador Due To Fire Precautions 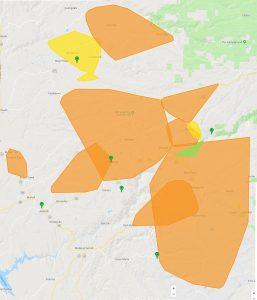 Update at 4:12pm: PG&E is indicating that a current outage due to wildfire danger is affecting 60,000 customers in Northern California, including in the Mother Lode.

It adds that plans are to restore power to approximately 70 percent of those locations by midnight tonight.

Counties impacted by the proactive “Public Safety Power Shutoff,” which the utility initiated last night, include Lake Napa and Sonoma counties in the North Bay and Amador, Calaveras, El Dorado and Placer counties in the Sierra Foothills. While PG&E had notified approximately 97,000 customers of the possibility that power would be turned off, conditions did not require all to be impacted.

PG&E officials state that as crews assess damage from the weather event, the company will continue to proactively communicate with customers, providing them more detailed information about expected time of restoration.

“We know how much our customers rely on electric service and only considered temporarily turning off power in the interest of safety, and as a last resort during extreme weather conditions,” said Pat Hogan, PG&E senior vice president of Electric Operations. He added that the company appreciates customers’ patience as restoration progresses.

PG&E’s 24/7 Wildfire Safety Operations Center and the utility’s in-house meteorologists had been monitoring the weather for several days leading up the decision to turn off power for safety.

Among the factors considered are whether the National Weather Service issued a Red Flag Warning, humidity levels, projected sustained winds, temperature, condition of fuel on the ground and on-the-ground observations.

Original Post at 10:13am: West Point, CA — Thousands are without power in parts of the Mother Lode today as part of a new strategy implemented by PG&E.

In response to the deadly wine country fires last year in Napa and Sonoma counties, PG&E is now proactively turning off power in areas of high wind and fire risk. PG&E reports that around 3,000 customers are without power in Calaveras County, and it stretches from the outskirts of Jesus Maria, to Railroad Flat, Wilseyville and West Point.

Meanwhile, in Amador County there are around 8,000 customers without electricity. Communities impacted include Pine Grove, Volcano and Pioneer.

It is unclear when there will be full restoration. A Red Flag Fire warning for the Mother Lode continues through late this evening.  The outages are unrelated to the 35 acre fire burning in Mountain Ranch today.