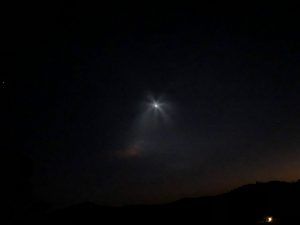 Jamestown, CA — Residents across the Mother Lode had a clear view of the first ever SpaceX Falcon 9 rocket launch from the West Coast.

It took off at 7:21pm Sunday from Vandenberg Air Force Base (160 miles north of Los Angeles) and returned safely to base about 10 minutes later. The Associated Press reports that it was carrying an Argentinian satellite into space. It lit up the skies across California, and many in the Mother Lode were sharing photos on social media shortly after it occurred, wondering what they had just viewed.

A special thanks to community news partner Jennifer Teem for emailing a photo. Pictures can be sent to news@clarkebroadcasting.com.