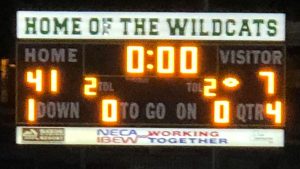 The Wildcats opened the month of October at home Friday night and rolled to a big win, 41-7 to the Argonaut Mustangs.

In the first quarter, the defense was the stars with both teams battling around the middle of the field. Finally, Sonora’s Jake Gookin slid sideways, found a seam, got some nice down field blocking and took the ball 53 yards for the score. Bryan Wynne converted the extra point and the Cats would close the first quarter with a 7-0 lead.

Opening the second quarter of action, the Wildcat offense controlled the ball and the clock with Evan Bearden hauling in a 49 yard pass for a touchdown. Sonora would score two on the point after as Gookin took a direct snap into the end zone giving the Cats a 15-0 lead. Sonora’s defense played disciplined football all night. Reading their keys on an Argonaut offences’ misdirection, Wildcats Devun Battle grabbed an interception for the second week in a row deep in their own territory to shut down a Mustang drive. Sonora’s Dalton Tarter would get in on the scoring action and take the ball from 18 yards out and go relatively untouched for the score. The two point conversion failed and it was shutout going into half-time with the Cats up 21-0.

As the third quarter opened, the Sonora offense continued its scoring attack as Gookin would again show his lateral movement skills and break one loose for 53 yards for the score. Wynne would convert the point after try and it was all Wildcats 28-0. After a Sonora fumble lost in their own territory, the Mustangs were able to finally end their scoring drought as Mason Flores would punch one in from 18 yards out and with the extra point it was 28-7 in favor of Sonora.

The fourth quarter was all Sonora as Tarter broke through the line and took the ball 10 yards for a score. Wynne would tack on his third point after and Cats lead the Mustangs 31-7. Gookin would add yet another score from 12 yards out, but the kick was a miss. The game ended with Sonora remaining undefeated in Mother Lode League play, 41-7.

Next week the Wildcats are home against Amador for their homecoming game.

Summerville Slips Up Against Calaveras

Summerville suffer a loss on homecoming night against Calaveras, 21-14. The Bears played well in front of the sold out crowd for the first half. As usual the defense was stout, stopping the run and forcing punts. After some trading over possession, it was scoreless going into the second quarter until Calaveras broke the ice, scoring and taking the lead 7-0.

Before halftime, sophomore Quarterback Jayden Brochnii led his best drive of the season. A trick play with a double reverse and then a toss back to Brochnii who found Mike Litzler wide open in the end zone to tie the game going into half.

The halftime homecoming fireworks were great, but those would be the only fireworks for the reminder of the game as Summerville was silent in the third quarter. Calaveras began to dominate, running the ball well and taking a 21-7 lead, before the Bears finally scored in the last minutes of the game to make the final score 21-14. Summerville will host Bret Harte next week.

The Bret Harte Bullfrogs lost on the road against Amador, 37-6.