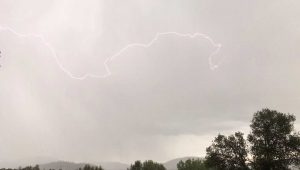 The National Weather Service has issued a Flash Flood Warning for central Mariposa County and southwestern Tuolumne County until 4:15 PM.

Move away from recently burned areas. Life-threatening flooding of creeks, roads and normally dry arroyos is likely. The heavy rains will likely trigger rockslides, mudslides and debris flows in steep terrain, especially in and around these areas.

Additionally, a Flash Flood Watch remains in effect for the Donnell Burn Scar and Ferguson Burn Scar areas through 7 PM this evening.

Flash flooding is possible this afternoon and evening in the Donnell Fire burn scar area.

Scattered showers and thunderstorms may produce intense rainfall that may cause debris flows and flash flooding in these areas.

Heavy rain can cause flash flooding and debris flows in these recently burned areas.

A Flash Flood Watch means that conditions may develop that lead to flash flooding. Flash flooding is a very dangerous situation. You should monitor later forecasts and be prepared to take action should Flash Flood Warnings be issued.