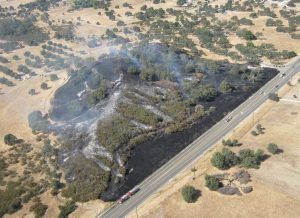 Update at 10:52am: Firefighters have reached full containment on the vegetation fire near the intersection of Highway 12 and Pettinger Road. The revised size estimate is 16 acres, according to CAL Fire. The evacuation order for nearby structures has been lifted and all roads have been re-opened. Mop-up will continue into the afternoon. The cause of the fire is still under investigation.

Update at 9:35am: CAL Fire spokesperson Lindy Shoff reports that the forward rate of spread of the fire near the intersection of Highway 12 and Pettinger Road has been stopped at five acres. Air resources from Columbia have been released and are returning to base. Mop-up will continue this morning, so be prepared for activity in the area. No structures were damaged. Officials are investigating the cause of the fire.

Update at 9:03am: CAL Fire reports that the fire in Calaveras County is five acres and it has been moving at a moderate rate of spread. It is burning in grass, oak woodland and brush. There is one nearby structure that crews are working to protect. Expect activity in the area.

Original story at 8:55am: Valley Springs, CA — Officials are arriving on the scene of a vegetation fire in the Valley Springs area.

It is reportedly burning along the south side Highway 12 near the intersection of Pettinger Road. We’ll pass along more information as it comes into the news center.