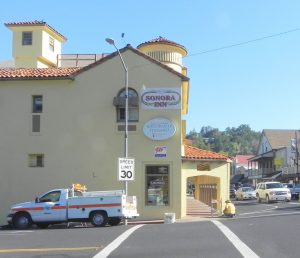 Sonora, CA — In the coming days Sonora City officials will host a public meeting to go over options for improving transportation along a key corridor.

The endeavor, which has been given the moniker of the Stockton — Washington Corridor — Downtown Transit & Accessibility Project, includes placing transit stops on either Stockton or South Washington Street as well as providing additional pedestrian and signal improvements along the streets and at the intersection.

Two alternatives will be presented at the meeting, which is scheduled for next Monday, July 23 from 4 to 7:30 p.m. at City Hall Chambers (94 N. Washington St.).

The first outlines placement of transit facilities along Stockton Street west of Green Street. The second locates them along South Washington Street north of Church Street. Both alternatives include modifications to the existing signal and enhancements for increased pedestrian safety and access through the project area. Design options for the transit shelters will also be shown.

City officials and project team members encourage downtown residents, businesses and other interested members of the public to learn more about the proposed plans, ask questions and provide feedback on the alternatives and improvement options at the event, which is being described as an interactive workshop.

For those unable to attend who would still like to weigh in on some of the variables, meeting materials and information will remain available online and at City Hall through July 31. For more information, click here.