Update: Vegetation Fire In The Forest 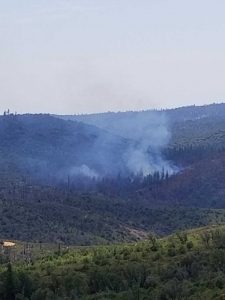 Update at 4:30 p.m.: Fire crews are making progress on the seven to ten acre Lost Fire burning in the Stanislaus National Forest near the Buck Meadows area of Tuolumne County. Forest spokesperson Diana Fredlund relays, “The forward progression has been stopped. It’s about 40-percent contained. The hand crews and the hoses are getting laid around the perimeter. The forest service tankers and the lead plane have been released.”

The flames broke out in the Lost Claim Campground, which was evacuated. Crews will remain on the scene working towards full containment into the night. Click here for additional video on a tanker dropping retardant and helicopter, here, dropping water on the flames. Both videos are courtesy of TCSO. Further details on the fire including resources used are below.

Update at 3:20 p.m.: Forest spokesperson Diana Fredlund has the latest information on the Lost Fire burning in the Stanislaus National Forest in the Packyard Canyon and Buck Meadows area of Tuolumne County. She relays, “They’re [fire crews] doing very well on their hand crews and the fire lines. Hoses are getting in place. They are maintaining the fire at about 7 to 10 acres.”

There is no containment at this time. Further details on the fire and resources on scene are below.

Update at 2:15 p.m.: Stanislaus National Forest fire officials have named the fire burning in the Packyard Canyon and Buck Meadows area of Tuolumne County the “Lost Fire.” The flames broke out in the Lost Claim Campground, adjacent to Highway 120 near the Groveland Ranger District office.

Forest fire officials update that the fire has grown to seven acres, but still moving at a moderate rate of spread.  They add that the right and left flanks of the blaze are holding with the support of air and ground resources.

Some of the aircraft on scene include a VLAT or Very Large Airtanker 911. Forest resources include helicopter 517; 4 engines, 1 water tender, and 1 dozer. Additionally,  CAL Fire is supporting the forest with engines, crews and aircraft.

A special thanks to our community partner Shelly Davis-King for sending in a photo.

Update at 2 p.m.: Tuolumne County Sheriff’s  spokesperson Sgt. Andrea Benson reports that at this time Hwy 120 is still open to through traffic, but asks motorists to use caution when traveling in the area.

Update at 1:15 p.m.: Forest Fire officials details the fire is 1 1/2 to 2 acres in size and moving at a moderate rate of spread. The flames broke out in the Lost Claim Campground, adjacent to Highway 120 near the Groveland Ranger District office in the Buck Meadows area of Tuolumne County.

Original post at 12:50 p.m.: Buck Meadows, CA — Ground and air resources are heading to the Stanislaus National Forest for a report of a vegetation fire in the Buck Meadows area of Tuolumne County.

CAL Fire details it is in the vicinity of the Lost Claim Campground, adjacent to Highway 120 near the Groveland Ranger District office. There is no information on the fire’s size of the flame’s rate of spread at this time. We will bring you more details as soon as they come into the new center.