Vehicle VS Pedestrian Ends In Fatality 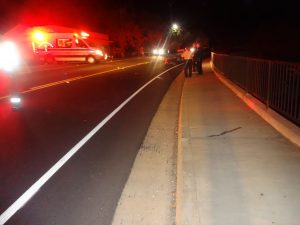 Sonora, CA – A 40-year-old Sonora man was sadly killed after being struck by a vehicle just before midnight on Tuesday.

The collision happened on Mono Way near Truckenmiller Road in Sonora. Krishna Livingston, a Sonora police spokesperson relays, “A white 2008 Toyota Prius, driven by a 30-year-old Tuolumne resident, was in the eastbound lane when he hit the pedestrian. The victim was taken by ambulance to an area hospital but succumbed to his injuries.” She adds, “Exactly what caused the collision remains under investigation, but it doesn’t appear at this time that there are any drugs or alcohol, either of those were not a contributing factors for the driver of the vehicle.”

Livingston states the names of those involved are not being released at this time.