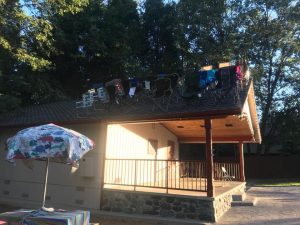 Twain Harte, CA — A jokester may have been trying to give some concert goers a better seat or possibly less competition in getting one for himself.

It is customary for concert attendees to leave chairs in front of the stage the night before a Saturday concert hosted by the Twain Harte Chamber of Commerce in Eproson Park that run throughout the summer. However, a prankster took that custom to a whole new level. As shown in the image box, the rascal gathered up all the chairs and put them on the roof of the stage.

It is unclear if the mischievous fellow wanted to help others get a close up view of the Santa Cruz style Rock & Roll band “Snarky Cats” or is a crazed fan being snarky and trying to get the best seat, front and center stage, for themselves.

The Twain Harte Community Services District relays that the chairs have been piled near the stage. Owners can come down and re-stake their claim for a front row seat before the concert begins at 6 p.m. tonight.