Smoky Skies Could Return To Sonora 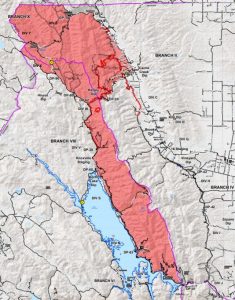 Sonora, CA – Mother Nature could cause problems for firefighters battling the County Fire burning in Napa and Yolo counties west of Sacramento and bring smoke to the Sonora area once again.

The blaze has forced residents from their homes and destroyed ten structures. Its acreage has climbed to over 88,300 acres and along with that so has the containment to 48-percent. CAL Fire officials relay that steep and inaccessible terrain has created difficulty for firefighters along the Northern portion of the fire. Higher temperatures, lower humidity and winds are expected to return to the burn area today, which may influence fire activity and increase smoke production.