Couple Arrested For Drugs And Two Toddlers Removed From Home 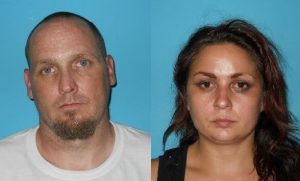 Sonora, CA — Tuolumne County Sheriff’s Office has released information regarding the arrest of a couple on probation and removal of two toddler children from their home.

Jason Stevens, 39, and Amy Kersey, 28, have been arrested and booked for possession of drug paraphernalia and endangering the health of a child. Officers are still seeking Stormi Breseman who shares the home with the couple and was not home during the search.

On Thursday morning, July 5, the Deputy/Probation High Risk Supervision Team searched a home on Lower Hillview Drive in Sonora. Sheriff’s Spokesperson Sgt. Andrea Benson says, “Numerous items of drug paraphernalia including methamphetamine smoking pipes and burnt foil, were located throughout the home.” Sgt. Benson adds the drugs and related items were in areas easily accessible to the two toddler children who live in the home. The home was also described as having dog feces and trash scattered throughout. Child Welfare Services was called to the scene and took custody of the two children.