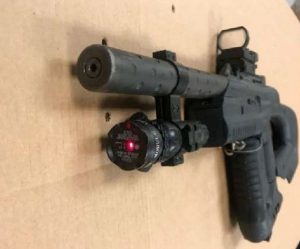 Gun found at the scene

Update at 6 p.m.: Calaveras County Sheriff’s officials are releasing new details regarding the criminal history of 38-year-old John James Corrigan of Mountain Ranch who was shot and killed by law enforcement officials last night. Corrigan is a registered sex offender and convicted felon. He has a lengthy criminal record spanning from the Central Valley to Southern California in the Chatsworth area where he has another residence, according to sheriff’s officials. In 2004 he was convicted of lewd or lascivious acts with a child under 14 years of age. Corrigan also has previous arrests for rape, drugs, DUI and disturbing the peace. The deputies involved in the shooting have been placed on paid administrative leave. The weapon, pictured in the image box, found at the scene is a automatic air rifle capable of firing multiple metal projectiles in a rapid fire or fully automatic mode, according to sheriff’s officials. Further details on the shooting can be found below. Click here for more details on the gun found at the scene.

Update at 4:30 p.m.: Calaveras Coroner has released the name of the 38-year-old Mountain Ranch man shot and killed by law enforcement officials. He is John James Corrigan, further details about the shooting are below.

Update at 12:30 p.m.: Mountain Ranch Road has reopened to traffic. It  was closed overnight and into the morning east of Rocky Road as detective survey the scene for the ongoing investigation.

Dispatch received multiple calls around 9:45 p.m. regarding a white male waving a gun and acting strangely on Mountain Ranch Road near Rocky Road, which is between San Andreas and Mountain Ranch. Sheriff Rick DiBasilio tells Clarke Broadcasting that the callers described the gun as an AR-15 or a shotgun. Three sheriff’s deputies and three CHP officers responded, when they arrived on scene they found a white male subject matching the descriptions given. He was on the side of the road holding  a long black object that appeared to be a riffle or long fire arm, according to Sheriff DiBasilio, who provides these details; “The subject was standing in the area between two separate homes. The long black object had a laser type sight attached. The subject pointed the object and laser towards the law enforcement officers. The subject was reportedly refusing to comply with the officers. In fear for their safety as well as the safety of nearby residents, law enforcement fired their weapons striking the subject.” He adds that a long-gun was found in the suspects hand.

DiBasillo says it is believed that two deputies and a CHP officer fired their weapons, but he does not know how many shots were fired or hit the subject.  Medics at the scene pronounced the gunman dead at the scene. His name is not being released pending notification of family. Sheriff DiBasilio says an autopsy will be done to determine if drugs or alcohol influenced the man’s behavior.

A multi-agency investigation that includes the Officer Involved Shooting Teams or Critical Incident Response Teams from the sheriff’s office, CHP and the District Attorney’s office is under way, with the latter heading up the investigation.  Mountain Ranch Road is closed east of Rocky Road as detectives survey the scene in the ongoing investigation.