A Jet Skier’s Lack Of Apparel Landed Him In Jail 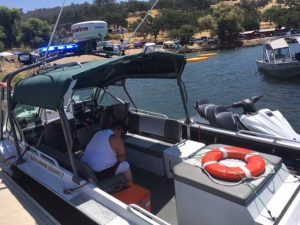 Copperopolis, CA — A man on a jet ski caught the attention of the boat patrol on Lake Tulloch in Copperopolis due to what he was not wearing and wound up behind bars.

The boat patrol stopped Werner to inform him of the law, while also checking on the watercraft’s registration. It revealed that the WaveRunner and its trailer had been reported stolen to the Fremont Police Department. Warner was taken into custody. After a quick patrol of the South Shore Marina parking lot, the trailer was discovered in one of the stalls.

Werner faces possession of stolen property charges. The sheriff’s office is working with Fremont police to return the recovered property to the rightful owner.