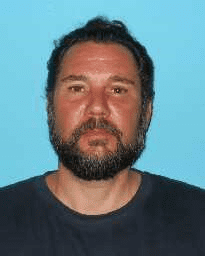 Sonora, CA — Unneighborly behavior helped rack up another felony arrest for a Sonora man out on bail for an unrelated felony charge.

According to Tuolumne County Sheriff’s spokesperson Sgt. Andrea Benson, deputies responded Monday evening to a home on Awahanee Road in Cedar Ridge after a resident reported damage to a 2007 Honda Accord he had parked in front of a home there on Sunday night.

Deputies learned that the resident of the upstairs unit, 43-year-old Jerry Pello, used a rock to repeatedly hit the windshield, hood and roofline area of the car, which resulted in well over $400 in damage.

When they questioned Pello about the incident he admitted to being the perpetrator and was subsequently booked into the Tuolumne County Jail for felony vandalism and committing a felony while out on bail. While he had been previously released on his own recognizance, following his re-arrest he was assigned a $35,000 bail.