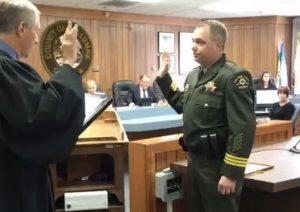 Sonora, CA — The Tuolumne County Board Supervisors voted this afternoon to appoint Bill Pooley to finish out Jim Mele’s term of sheriff that runs through the end of the year.

Right after the vote, Judge Donald Segerstrom administered the formal oath of office and noted that Pooley’s family goes back five generations in the county. Judge Segerstrom stated it is important to have a knowledge of the people, places, and how the county works.

Pooley was emotional as he thanked his family, the community, staff and former sheriff Jim Mele.

Pooley received a standing ovation from the packed room, and ended by joking, “I didn’t think I knew this many people. Thank you for all being here.”

After finishing out Mele’s current term, Pooley’s four-year-term will start in January.