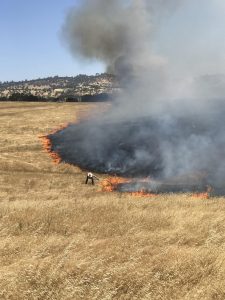 Update at 7:50am: CAL Fire spokesperson Emily Kilgore reports that the Waverly Fire is now officially 100-percent contained. Updated mapping puts the final acreage at 11,789. Crews will still be on scene mopping up the incident over the coming days.

Original story posted at 6:50am: Sonora, CA — Great progress was made over the weekend fighting the Waverly Fire burning east of Linden near Waverly Road.

The fire ignited on Friday afternoon and resulted in nearby evacuations and road closures. They were lifted, thankfully, by late Friday, when the forward rate of spread was stopped. The fire is considered 95-percent contained and 12,300 acres.

Also yesterday afternoon, CAL Fire aircraft was busy helping to extinguish the “Triangle Fire” near Midpines. The forward rate of spread was stopped at around five acres.

There was also a one acre fire that ignited yesterday afternoon in Valley Springs that was quickly contained. CAL Fire reports it was caused by debris being burned in a barrel. A citation was issued to the person responsible for the incident.

The most notable fire still burning in the State of California is the “County Fire” burning in Lake, Napa and Yolo counties. It is 32,500 acres and 2-percent contained. Many areas nearby have been evacuated. It ignited near Highway 16. It has sent heavy smoke about 75-miles to the south into the San Francisco Bay Area.