Another Campfire Sparks A Wildfire In Calaveras Fire 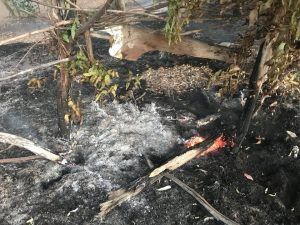 Burson, CA — Last week a campfire near Murphys took off in some vegetation and this week flames spread from one in Burson – prompting CAL Fire to remind the public of the high fire danger.

Both blazes were  in Calaveras County. Once on scene near the 3800 block of Dickenson Court in Burson, firefighters put out a small vegetation fire. CAL Fire relays the “Dickenson Fire” was a very close call for some juveniles and a neighboring property as an unauthorized campfire spread to the surrounding vegetation. Fortunately, the flames spread was limited as the property owner had cleared the adjacent field, according to CAL Fire officials, who share that a warning was issued to the property owner and the juveniles.

As reported here, the campfire in Murphys on Friday, June 22nd was contained at just under two acres.