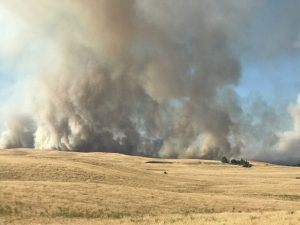 Update at 8:50 p.m.: CAL Fire reports that a Red Cross Shelter is going to be opening in the next couple of hours at the Jenny Lind Elementary School located on 5100 Driver Road in Valley Springs. Service animals are being accepted at the shelter per the Red Cross. Further details on the Waverly Fire area below.

Update at 7:18 p.m.: CAL Fire reports the Waverly Fire has grown to 3,500 acres and is burning to the southwest toward Hwy 4 in the Milton area of Calaveras County.

A special thanks to our community partner Maria Boklund for sending in the photos.

Update at 7:04 p.m.: The Calaveras Sheriff’s Office has evacuated the communities of Milton and Salt Springs Valley, which includes all residences along Rock Creek Road to the Salt Springs Reservoir. The fire remains at 1,500 acres and 10% contained.

Update at 6:28 p.m.: The Calaveras Sheriff’s Office is managing evacuations in Milton. CAL Fire reports the fire has grown to 1,500 acres. Air attack and CAL Fire crews are on scene. Milton Road is closed from Hwy 4 to Hwy 26. Rock Creek Road and Hunt Road are closed as well.

Update at 6:11 p.m.: The Calaveras Sheriff’s Office is starting evacuations in town of Milton. CAL Fire estimates nearly 50 homes are threatened. The Waverly Fire began burning in grass along North Waverly Road near Shelton Road east of Linden in the northern tip of San Joaquin County. The flames have now crossed over to Calaveras County. The CHP has closed Milton Road from Rock Creek to Hunt Road to Highway 4.

Update at 5:35 p.m.: The CHP is closing Milton road from Rock Creek Road to Hunt Road. CAL Fire is asking the public to avoid the area.

Update at 5:14 p.m.: The Waverly Fire has grown to 700 acres, CAL Fire reports. CHP has closed Milton Road in the area of Highway 26 for this grass fire.

Update at 4:15 p.m.: CAL Fire reports the Waverly Fire has grown to 200 acres. Further details on the fire are below.

Update at 3:50 p.m: CAL Fire has named the blaze the “Waverly Fire,” which is burning along the 8000 block of North Waverly Road near Shelton Road in the Linden-Peters area in San Joaquin County. It has grown to 150 acres. It is burning southwest of Jenny Lind, off Highway 26 near the Calaveras County line. CAL Fire spokesperson Emily Kilgore tells Clarke Broadcasting that no structures are threatened. She adds that the aircraft on scene are five air tankers, three helicopters and Air Attack.

CAL Fire spokesperson Lindy Shoff reports that it is in San Joaquin County but close to the Calaveras County line. The flames are reported in the 8000 block of North Waverly Road but no further details are available at this time. We’ll keep you updated as more details come into the news center.