Nouillan Is The Most Radiated Man On Earth 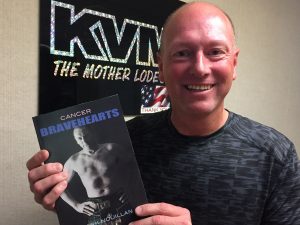 Thirty plus years of being treated for various forms of cancer has left Twain Harte resident Mark Nouillan, the most radiated man on the face of the earth.

Nouillan was Friday’s KVML “Newsmaker of the Day”.

The Scottish born Nouillan was told by one doctor that, based on the amount of radiation treatment received, Nouillan is now the most radiated man on the face of the earth.

Nouillan has written a book that is being given to cancer patients at Adventist Health Sonora, as well as sold at Mountains Books in Sonora. It is called “Cancer Bravehearts”.

Locally, Nouillan has been asked to speak at the upcoming Joie De Vie Gala on September 30th.

Additionally, Nouillan will soon hold a seminar at Black Oak Casino Resort called Cancer Bravehearts Live. Tickets for the August 10th event are $40 and includes a buffet style meal and a personalized copy of of the book. Doors open at 5 PM. The event concludes around 9 PM.

More information will soon be available on www.cancerbravehearts.com

According to Nouillan, “Based on my own experience of dealing with Leukemia and Breast Cancer, I chose to write this book and hold inspirational seminars to let others know that their life is far from over. The reality is quite different. You’ve now been giving the chance to truly focus on your intentions and you can decide to take control. If you have ever heard that you have cancer, then my book is for you.”