An Explosive Situation Discovered In Sonora 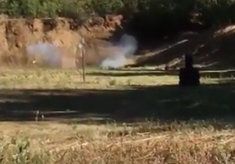 Sonora, CA – A report of dynamite found in an old mine Tuesday afternoon in Sonora ended with a bang as a bomb squad blew up the sticks.

A total of six sticks were discovered at an old mining claim at the end of Jack Page Road off Highway 49, between Columbia and Sonora. Tuolumne County Sheriff’s officials describe the sticks as spongy and share that it is unclear how long the dynamite had been in the mine.

Calaveras County Sheriff’s Office Bomb Squad was called to the scene and the mine area was cordoned off. Members carefully moved the explosives to an open area and as the video in the image box shows that it was disposed of by setting it off.

Sheriff’s officials caution that old dynamite can be very unstable, and warn the public not to move, cover, or transport explosives that are found. Sheriff’s officials share that it is lucky the dynamite did not explode unintentionally and that no one was injured.

As a safety precaution, Cal Fire was also called to the scene for fire prevention.