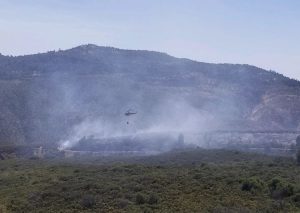 Update at 8:43pm: All evacuation orders have been lifted related to the Flat Fire near Moccasin, according to the Tuolumne County Sheriff’s Office. Highway 49 near the fire will remain closed into Monday morning. The Red Cross is now closing its evacuation center in Sonora. The Flat Fire has burned 152 acres and is 25-percent contained. No structures have been lost, according to the sheriff’s office.

Update at 8:15pm: The California Highway Patrol reports that Highway 49 will remain closed from Highway 120 (Moccasin Point) to Penon Blanco until 10am on Monday. It is due to cleanup and ongoing firefighting operations near the Flat Fire.

Update at 5:45pm: The Tuolumne County Sheriff’s Office reports that the Red Cross is opening an evacuation center at 6pm in the Fireside building at the Severnth Day Adventist Church at 40 North Forest Road off Stockton Road in Sonora. It is for anyone impacted by the Flat Fire near Moccasin and will accommodate small domestic animals only. That said, there will not be any shelter services, or areas to sleep.

CAL Fire is anticipating the mandatory evacuations related to the Flat Fire will be lifted by 8pm. The latest update on the Flat Fire remains that it is 120 acres and 25-percent contained. CAL Fire reports crews are making good progress on the blaze.

Update at 4:58pm: You can click on the video box to view footage of a CAL Fire helicopter loading up more water to fight the Flat Fire. It was provided by the Tuolumne County Sheriff’s Office. The fire remains 120 acres and 25-percent contained. Crews have made good progress slowing the rate of spread. All earlier evacuation orders and advisories still remain in place.

Update at 3:55pm: CAL Fire reports that 25-percent containment has been reached on the 120 acre Flat Fire south of Moccasin. Crews are successfully making progress slowing the spread of the flames. The earlier evacuation orders and advisories still remain in place.

Update at 3:20pm: CAL Fire reports that there is now an advisory evacuation notice for residents along Yosemite Springs Road. The earlier mandatory evacuations remain in place for Jackass Ridge Road , Jackass Creek Road, Ofelia Court and Priest Coulterville Road (to the Mariposa County line). Crews are making some progress slowing the fire, according to officials, battling the fire in the difficult terrain and high heat. The latest size estimate for the Flat Fire remains 120 acres. It is on the east side of Highway 49 and south of Priest Reservoir.

Update at 2:35pm: Tuolumne County Animal Control is assisting residents with the evacuation of livestock. Anyone needing help evacuating livestock should call the Tuolumne County Sheriff’s Office at 209-533-5815. An evacuation area for animals is set up at 2759 Ranchito Drive in La Grange.

Update at 2:14pm: CAL Fire reports that the Flat Fire near Moccasin is now 120 acres. Crews continue to aggressively fight the blaze. All earlier noted evacuations remain in place.

Update at 2pm: CAL Fire has added mandatory evacuations for all of Jackass Ridge Road and Jackass Creek Road near the Flat Fire. The earlier evacuations also remain in place.

Update at 1:50am: CAL Fire is now including all of Priest Coulterville Road to the Mariposa County line. The mandatory evacuation also remains in place for Ofelia Court.

Update at 1:40pm: The latest update on the Flat Fire is that it is 60 acres. Highway 49 remains closed at the intersections of Highway 120 and Highway 132. You will need to avoid the area. The Tuolumne County Sheriff’s Office is planning to release information soon in regards to evacuation notices, according to Sgt. Andrea Benson.

CAL Fire is calling the blaze the Flat Fire and reports the fire is 60 acres in size. There is no word on the flames rate of spread or whether any structures as threatened at this time. There is a hard closure for traffic at Highway 49 and 120 and Highway 49 and 132. We will keep you updated as more details come into the newsroom.