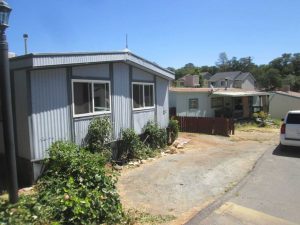 Cepeda's mobile home that was searched

Jamestown, CA — A Jamestown man is behind bars on $100,000 bail after his home was raided by the Tuolumne County Probation High Risk Supervision Team.

One item that sheriff’s deputies found inside the Jamestown Road home was a bit of a surprise. It was a military smoke grenade. Sgt. Andrea Benson indicates, “The Calaveras County Explosive Ordinance Disposal Unit was called to the home and confirmed the grenade met the elements of a destructive device.” The search also netted Butane Honey Oil manufacturing equipment, 48 grams of marijuana, a pay/owe sheet and drug paraphernalia.