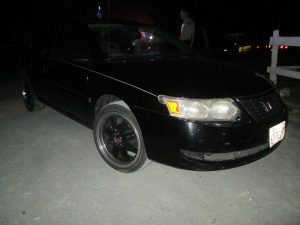 Jamestown, CA – The nose of a Tuolumne County Sheriff’s K9 was credited with putting a Turlock man behind bars after sniffing out his stash.

K9 Maverick was called in to conduct a sniff search of a Saturn that was pulled over late Monday night on Wigwam Road in Jamestown for having an expired registration. A records check found the driver, 44-year-old Michael Holder, was on post release community supervision. Holder also admitted his driver’s license was suspended.

As Maverick moved around the car, he alerted to the odor of a narcotic substance when he got the driver’s side door, according to spokesperson Sgt. Andrea Benson, who details that hidden behind the panel were two bags of methamphetamine totaling over 14 grams.

Holder was taken into custody for transportation of a controlled substance for sale, felon in possession of pepper spray and driving with a suspended license. His bail was set at $20,000.