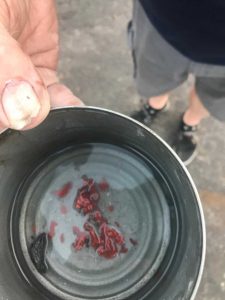 Columbia, CA — New information has been released about yesterday’s emergency aircraft landing on Highway 49 near the Archie Stevenot Bridge.

Initially the Tuolumne County Sheriff’s Office reported that it was due to the plane being low on fuel. As new details have emerged, this was not actually the case, as there was plenty of fuel in the tank. Sgt. Andrea Benson shares, “The aircraft was forced to make a precautionary landing onto Highway 49 according to protocol due to a ‘fuel flow issue.’ Once additional safety checks were made, a road closure was provided so the aircraft could safely take off.”

Clarke Broadcasting has learned that the pilot is Chris Miller, a well experienced local pilot, who has taught many students flight lessons over the years at Columbia Airport. It was an impressive landing on the highway and done as a precaution after Miller identified problems with the plane’s performance.  Miller was flying a rare Stearman aircraft.

A photo has been provided of Miller holding debris that was found to be a factor in the fuel line flow problems. The issue is still being investigated by mechanics.