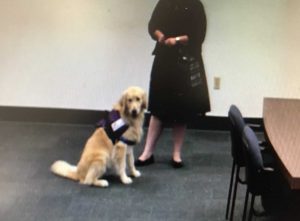 Sonora, CA – Paid in praise and treats, the newest member of Tuolumne County’s District Attorney’s office was introduced to Supervisors at today’s meeting.

Stewart, a two-year-old Golden Retriever, will join Anne the other dog in the Victim Witness Program. District Attorney Laura Krieg touted his skills in calming potential witness, especially children, and even going to court with them to keep them calm during testimony.  As noted enthusiastically by Krieg, “Stewart was raised by inmates at Mule Creek State Prison as part of the rehabilitation program and through the ‘Tender Loving Canines’ assistance dogs program. He was trained by the inmates to be a court support dog…He was funded by a state grant for child advocacy.”

Krieg also praised the Soroptimist International of Twain Harte, whose board members after meeting Anne, and finding there was a need for another canine in the county, decided to foot the bill. “They funded Stewart’s welcome home package and all of his supplies for the year, which was almost $3000,” acknowledged Krieg and adding, “We could not have brought Stewart to the county and to our victims without their help and support.”

Krieg also boasted about Stewart’s handler, “Our star Deputy District Attorney Cassandra Jenecke, who went through a very intense training program, is still working with Stewart. We are so grateful for her taking this on. It’s like I told her it’s like having a child, in a year you will believe it’s a great idea.” That brought an erupted of laughter from the board and attendees.