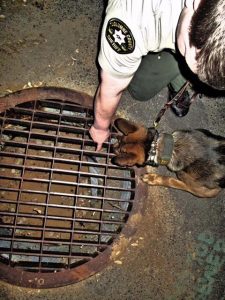 A concerned citizen notified the sheriff’s office regarding a baby quail that appeared to be stuck in a storm drain near Beckwith Circle in Sonora. When Maverick arrived he sniffed out multiple stray felines that were hanging around, and sheriff’s deputies realized they were trying to get to other family members that were down in the storm drain. Maverick watched over the chicks as deputies lifted the storm grate. A neighbor nearby brought over a shoe box and nine chicks were placed inside while deputies searched for the mother. When she was unfortunately nowhere to be found, the chicks were transported to the Tuolumne County Sheriff’s Office, and later picked up by Mother Lode Wildlife Care. The group will treat the orphaned chicks and eventually help release them back into the wild.