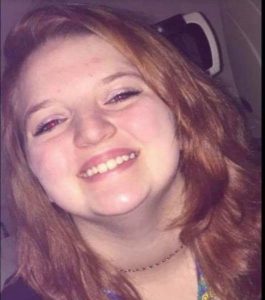 Update at 6:30 p.m.: The Calaveras County Sheriff’s Office is reporting an update in the case involving 15-year-old Samantha Roberts of Valley Springs.  Originally, investigators were looking for information on an adult Caucasian man driving a van that Roberts may have gotten into at the Murphys Shell Station on Monday afternoon. Since that information was released, individuals related to that van spoke to detectives who confirmed it was not the missing juvenile. Sheriff’s officials are still asking for anyone with information regarding Roberts disappearance to call the Calaveras County Sheriff’s Office at 209 754-6500 or the anonymous tip line at 754-6870. Further details on the missing teen are below.

Original post at 4:20 p.m.: San Andreas, CA — Calaveras sheriff’s officials are asking the public to be on the lookout for a missing 15-year-old girl who may have gotten into a vehicle at a Murphys gas station.

Missing since Sunday night is Samantha Roberts of Valley Springs. Calaveras County sheriff’s officials report that their office took a report Monday afternoon, adding that she was last seen at her residence in the 8000 block of Baldwin Street the evening before at around 9 o’clock and that a backpack and some of her clothing were also missing.

Initially Roberts was listed as a voluntary or at-will missing person and possibly a runaway juvenile. However, through social media, family and friends sharing photos have received several reports that she may have been seen accompanied by an adult Caucasian male along the Highway 4 corridor from Murphys to east of Arnold.

Officials say that deputies are now following up on possible sightings, collecting video surveillance and checking known locations known as ones where teens and young adults frequent. They are also asking for help from the general public in locating her.

Roberts is described as a white female with red hair and blue eyes, height 4’11”, weight 165 pounds. The sheriff’s office received a report that she may have been seen at the Murphys Shell Station on Monday afternoon around 2:15, getting into a newer model gray or silver four door SUV with a roof rack and panoramic sunroofs, possibly a 2018 Honda CRV or Pilot. The driver is described as possibly Caucasian, about 5’8” tall and around 150 pounds. He was also believed to be wearing a ball cap at the time. To view photos of Roberts and the vehicle, click into the image box slideshow.

Anyone with any information regarding this case or with possible knowledge about the whereabouts of Samantha Roberts are asked to call the Calaveras County Sheriff’s Office at 209 754-6500 or the anonymous tip line at 754-6870.