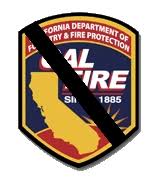 Sacramento, CA — In honor of a fallen CAL Fire engineer who lost his life while helping battle the now 242,500-acre Thomas Fire in Ventura County Governor Jerry Brown ordered that flags at the Capitol be lowered to half-mast.

CAL Fire protection Engineer Cory Iverson, 32, of Escondido, died earlier today but no details of the circumstances were released in this afternoon’s earlier statement from CAL Fire Chief Ken Pimlott, who indicated that events were continuing to unfold and that the family of a Cal Fire engineer from a San Diego unit had been notified of the tragedy.

However, shortly after 3:30 p.m., following a scanner tone-out, a dispatcher’s bulletin announced Iverson’s name and that Chief Pimlott had ordered the lowering of flags at CAL fire stations along with the direction for personnel to shroud their badges until further notice.

Iverson’s death is the second death linked to the Thomas Fire. A 70-year-old woman was killed in a car crash while attempting to flee the flames last week; her body discovered inside the wrecked car along an evacuation route.