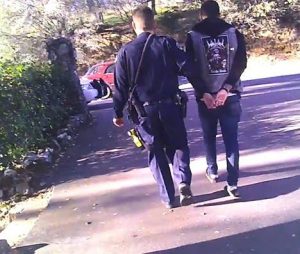 Sonora, CA – Tempers flared between a couple leading a Sonora man to use a wrestling move on his girlfriend landing him behind bars.

A report of domestic battery came into Sonora Police dispatch just before 2 p.m. on Thursday. When officer arrived on the scene in the 200 block of Snell Street a woman told them that 23-year-old Shane Steven Johnson of Sonora had assaulted and threatened to kill her. She detailed that the two got into an argument and Johnson allegedly threw her to the floor. He then put her into a headlock and forcibly removed her from the home. The victim did not suffer injuries from the alleged assault.

Johnson was taken into custody without incident. He faces domestic battery and criminal threats.