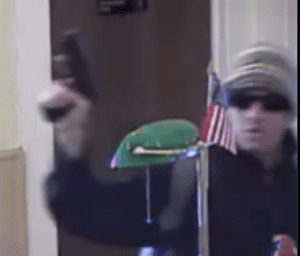 Sonora, CA – Today the FBI issued more details regarding the “Khaki Bandit,” a serial bank robber who is thought to be the perpetrator of Tuesday’s robbery of Groveland’s Yosemite Bank.

Along with reiterating that the agency is offering a reward of up to $20,000 for information that will lead to the arrest and conviction of the suspect, who it describes as armed and dangerous, it lists several rural Northern California banks he is thought to have successfully robbed over the past four years. They are:

As reported here, during each of the robberies, he brandished a black handgun and demanded money from tellers then fled after receiving and stashing it in a backpack or bag. He has been captured on surveillance footage wearing a variety of dark-colored clothing and often worn stocking or ball caps. To view more FBI photos, click here.

The FBI has provided an updated description, as follows: he is a white male in his 20’s or 30’s; approximately 5’8” to 6’ tall with a slender build and dark hair. At the time of the robberies, the subject has frequently worn khaki pants – hence his FBI nickname – and long-sleeved, zip-front shirts and jackets along with a hat and black glasses.

As reported here, anyone who might spot or have information about this suspect should contact the Tuolumne County Sheriff’s Office and/or dial 911, or get in touch with the FBI, which indicates that tips may also be submitted online at tips.fbi.gov.