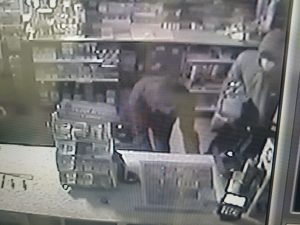 San Andreas, CA — The public’s help is requested to help catch thieves who early this morning quickly broke into a local gas station and pulled off a heist under cover of dark.

According to Calaveras County Sheriff’s officials, about 1:30 a.m. someone called dispatch after noticing a black Chevy Tahoe with paper plates driving with headlights off around the 76 gas station in Valley Springs. While deputies were responding the dispatch center also received an alarm call for that business.

They arrived to find the glass front doors had been shattered and it was subsequently determined that several thousand dollars worth of cigarettes and lottery tickets had been snatched, according to sheriff’s officials, who add that a BOL (Be On the Lookout) bulletin on the vehicle was quickly sent out to surrounding law enforcement agencies.

The San Joaquin County Sheriff’s Office responded to the BOL, sharing that one of its patrol units had initiated but ultimately terminated a pursuit of a truck matching the description, as it headed west on Highway 26 within minutes of the apparent burglary but the vehicle fled the area.

Calaveras Sheriff’s officials have released surveillance images from the burglary scene (to view them click into the image box slideshow) with hopes that the suspects in the photos might be identified by members of the public. Anyone who might recognize any of the suspects or with possible information about the incident is asked to call the Sheriff’s Office at 209 754-6500 or the anonymous tip line at 209 754-6030.