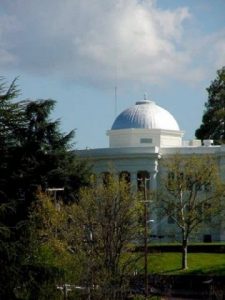 Update at 3:09 p.m.: A local school district board set to discuss potential future plans for a historic property that it owns has moved tomorrow’s meeting venue to the Sonora High School library, a larger venue.

The agenda also indicates that, following general public comments, the trustees’ discussion over the Dome building and more public input about the topic, the board will convene into a closed session to negotiate possible criteria for lease or sale of the property.

Original Post 12:07 p.m.: Sonora, CA – A reminder, tomorrow is when the Sonora Union High School District trustees themselves will finally officially weigh in individually on how they would like to deal with the historic, district-owned Dome building.

As reported here, Clarke Broadcasting talked at length last week with District Superintendent Pat Chabot about the familiar, well-beloved though nearly vacant landmark building that sits above downtown Sonora. Non ADA-compliant, the district cannot use it as a facility for students.

Chabot shares that he hopes that in addition to discussing the citizens’ advisory council’s nonbinding recommendation to declare it as surplus and parcel it off for potential sale he will get some much-needed formal direction from the board as how to proceed as well as hear any new ideas.

Among the recent thoughts Chabot has heard is the possibility of renting the building out for special events, an idea that sparked when local Habitat For Humanity officials contacted the district about wanting to use part of it for a function it is planning next fall. He emphasizes that the public is invited to attend the meeting, which will be held at the district office beginning at 6 p.m.