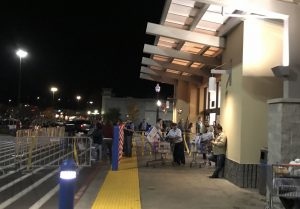 Sonora, CA — An estimated 115 million Americans are out shopping on this Black Friday, according to the National Retail Federation.

The organization notes that with unemployment low and the economy in solid shape, retailers are hoping for a strong holiday shopping season. Many large retail stores in the Mother Lode opened last night. An estimated 164 million people are expected to shop sometime between Thanksgiving and Cyber Monday, about 69-percent of the population. In addition, tomorrow is what is often referred to as “Small Business Saturday,” where shoppers are encouraged to visit locally owned businesses, and Tuesday is deemed “Giving Tuesday” where people are encouraged to make donations on behalf of non-profits.