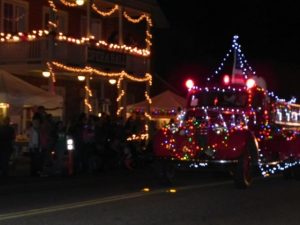 There will be three announcing stations along the parade route. Bridgette and Shelly from Today’s Country 93.5 FM KKBN, will be announcing near Courthouse Park. Mark Truppner from AM 1450 and FM 102.7 KVML and News Director B.J. Hansen will announce from the balcony of the old City Hotel in downtown Sonora. “Mark and Maryann” from Star 92.7 FM will announce from the Sonora Opera Hall.

Tuolumne County Transit will offer Free Holly the Holiday Trolley service the Sonora Christmas Parade.Service will run from The Junction Shopping Center (pickup at TJ Maxx) to downtown Sonora, Lyons/Stewart. The service will begin at 3:30 PM and run continuous loops downtown until the start of the Parade. After the Parade, the Trolley will run through 8 PM.

There will be ‘No Parking” allowed on the side streets between Washington Street and Green Street and between Washington Street and Stewart Street. This will include Elkin Street, Dodge Street, Jackson Street, Yaney Street, Bradford Street, Theall Street, Linoberg Street, Church Street, June Street, Gold Street, Williams Street, and Lytton Street. These restrictions will start at 4:00 PM and will conclude at the end of the parade. Vehicles parked in these areas will be towed as well.

Following the parade, the parade route will remain closed for approx. 10-15 minutes to allow spectators to leave the area. Motorists can expect heavy vehicle and pedestrian traffic at the conclusion of the parade, resulting in delays. If you have any questions regarding the street closures or the temporary no parking zones, you may call the Sonora Police Department at 532-8141.

Following the parade, Santa will at the Heart Rock Coffee Company (formally known as the Heart Rock Cafe), visiting with all of the boys and girls, good and bad, young and old.