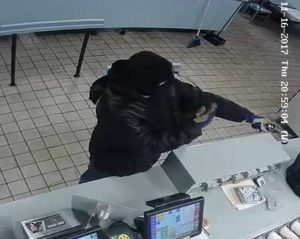 Sonora, CA — The Tuolumne County Sheriff’s Office is seeking help from the public in identifying a masked man.

The sheriff’s office reports that the suspect in a failed robbery attempt at the Burger King on Mono Way in Sonora is described as being a “heavy set white male, approximately 6’-6’4.”

The man entered the Burger King this past Thursday, November 16, just before 9pm. Employees told deputies that they were held at gun-point by the man, but were able to sneak out and run next door to call 911. Anyone with information regarding the suspect should call 209-533-5815.