So Close And Down To The Wire 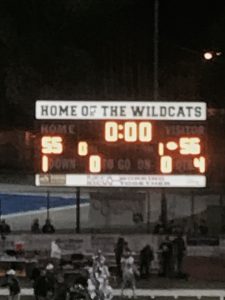 Sonora, CA –A hard fought, high scoring game at Sonora High’s Dunlavy Field in the semi-finals does not disappoint.

The Sonora High Wildcat winning streak was finally ended Friday night in the second round of the CIF Sac Joaquin Division V Semi-Finals by the Colfax Eagles in one of the most exciting football games at Dunlavy Field in recent memory.

On a cold, clear, dark fall night the Falcons drew first blood with their passing attack when Quarterback Ryland Hiemann hooked up on an 18 yard pass to Colton Reeves for a touchdown and with the extra point Colfax was up 7-0. The Wildcats took their next possession when Jacob Gookin scored from one yard out to cap off a brutal offensive drive and Bryan Wynne kicked a field goal ending the first quarter tied at 7-7.

In the second quarter, Colfax would come out gunning. The Falcons started their scoring on a one yard rush by Running Back Mason Ahrens into the end zone and the extra point would make it 14-7 Colfax. The Eagles took to the air on their next score seeing Wide Receiver Jake Green haul in a 31 yard TD reception and the extra point would have the Wildcats down by fourteen with Colfax leading 21-7. Sonora would get one back when Evan Bearden hauled in a Gookin pass for 31 yards and Wynne would add the extra point to cutting the lead to seven, Sonora 14, Colfax 21. The Eagle’s air assault would continue when Green hauled in his second TD reception from 21 yards out and with the extra point try converted the score going into halftime was 28-14.

Adjustments were made at half-time by both teams and the exciting first half was nothing compared to what was in store for the crowd at Dunlavy Field on this Friday before Thanksgiving. Gookin would start the scoring onslaught by keeping the ball, bouncing off defenders and taking the ball some 67 yards. Then Wynne, who remained perfect during the game, hit the end zone and the score was 28-21 with Colfax leading. Gookin would again decide his option was the best and take the ball through the Eagle defense and it was a foot race down 50 yards for another Sonora score, tying it up at 28. Sonora’s defense would not let the Colfax offense get going early in the third quarter forcing change of possessions and giving the Cat’s offense a chance. Mike McKernon would take a hand off, bang into a couple Eagles, tip toe down the sideline and score from 32 yards out and the extra point put Sonora up for the first time in the ballgame, 35-28. Colfax would battle back and Green again would haul in a Hiemann toss from 28 yards and with the extra point, the score was tied again at 35. “Crazy Legs” Gookin wasn’t done in the third quarter, pulling the ball and going 23 yards to the end zone, ending his third quarter with three scores for a total over 140 yards. Bryan Wynne would add another field goal point and at the end of the fourth quarter Sonora up, 42-35.

The fourth quarter would show what the teams were made of and why both made it into the Section Semifinals. The already brutal hits would increase in intensity and there was no letting up on either side of the ball. Ahrens would dive from one yard and get met at the goal line by Jack Camara of Sonora, who bent the Colfax player in half. Once the carnage was sorted out, the officials signaled Colfax touchdown and with the extra point we were tied again at 42. Sonora’s Gookin would rip off another huge chunk of yardage when he broke a 68 yard TD run and with the extra point the Wildcats went up 49-42. The Eagle’s Ahrens would answer right back to cap a Colfax drive with a 4 yard touchdown rush and the extra point would tie the game again at 49 apiece. Ahrens would add another score with less than two minutes left in the ball game and Colfax went up over Sonora, 56 to 49. Sonora would take the ball and move it up the field in their hurry up offense and with 22 seconds left in the ball game Gookin would throw a ball that only Evan Bearden could catch and then drag Colfax defenders 5 yards into the end zone and the crowd at Dunlavy went crazy with the Wildcats only down one point, 55-56.

Sonora, playing to win, decided to go for the two-point conversion.This was the season for both teams, with the winner heading to the section championship. After a Colfax time out, both teams would line up. As the steam rose off the 22 players digging in for what was surely the most important play of the game, an anxious filled quietness fell over Dunlavy. As the ball was snapped, the sounds of shoulder pads exploded through the air. As both teams collapsed into the center of the line, Gookin would take it right up the middle and as he stretched out to break the plane of the goal line, he was stopped just short by the Colfax defense. With the two-point conversion failing, the Wildcats were down one with seconds left, 55-56. Sonora had one last opportunity to get the ball back on the kickoff. With Colfax moving forward expecting an onside kick, the Wildcats special teams kicked to an area devoid of Eagle players and raced down the field in an attempt to get the ball back. Unfortunately, it was not to be as an Eagle receiver was able to beat out the Wildcats and Colfax would have the ball. The Eagles came out for the last play and were able to kneel on the ball ending the Wildcat 2017 football season.

Both teams should be commended for the effort put forth and the desire to keep moving forward to the section championship. After a rough start to the season for Sonora, the Wildcats put together an impressive winning streak, going undefeated from the third week of the season. Sonora was able to wrap up the Mother Lode League for the fourth year in a row and move deep into the playoffs. The Sonora Wildcats showed an enormous amount of football growth this year and even with injuries to key players early on, the Cats kept stepping up to the challenge, which is a testament to the Sonora coaching staff and their team attitude. Another great year of Sonora football comes to an end for the 2017 season. Thank you to all the faithful fans for showing up, listening in on Star 92.7 and 93.5 KKBN or streaming us live on myMotherlode.com and until next season, go Sonora Wildcats, Summerville Bears, Bret Harte Bullfrogs and Calaveras!