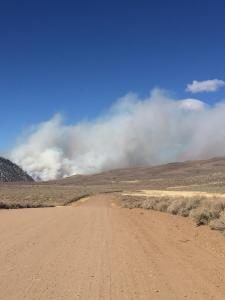 Walker, CA — Air and ground resources are battling a blaze named the Chris Fire near Sonora Pass that was ignited by a vehicle accident where flames spread to nearby vegetation.

The fire is burning in the Humboldt-Toiyabe National Forest’s Bridgeport Ranger District south of the community of Walker. Forest fire officials report it is 370 acres in size and 20 percent contained. The flames broke out west of Highway 395 about five miles north of Highway 108 Sonora Pass, near the Chris Flat Campground.  The fire is not easily accessible due to steep terrain covered in grass, sagebrush and timber, according to forest fire officials .

Resources on scene include 250 personnel, 10 handcrews, 1 water tender, 19 engines, and 1 dozer. In the skies there are 2 Air Attack and 3 helicopters.