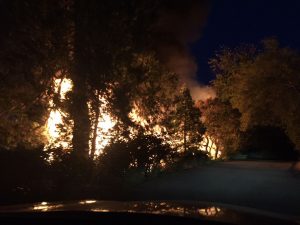 According to police officials, traffic is moving freely at the intersection of Park Lane and Oakside Drive, which had been closed for several hours. However, they add that as some fire apparatus remains there is still some congestion and caution motorists to be alert for fire personnel and equipment.

Update at 8:29am: Mop-up continues on a fire that ignited early this morning in Sonora. The initial report to firefighters was that it was located in the 600 block of East Bald Mountain Road, but the Sonora Police Department now confirms that it was actually along Park Lane. Most nearby roads have now re-opened near the fire, except for a small stretch of Park Lane. The fire destroyed a garage and caused partial damage to a home. What ignited the fire remains under investigation.

Update at 6:45am: Crews quickly slowed the spread of an early morning fire in Sonora. It completely destroyed a garage and caused partial damage to a home.

A special thanks to community news partners Jenn Connolly, Richard Imlach, Christine Melvin and David Polanco for sending in photos. Pictures can be sent to news@clarkebroadcasting.com.

Original story at 6am: Sonora, CA — Firefighters are on the scene of an early morning fire reported in the 600 block of East Bald Mountain Road in Sonora.

Initial reports from fire officials is that a garage caught on fire and it has spread to some nearby vegetation. Some nearby roads are being closed to help the firefighting efforts, so you will want to avoid the area. We’ll pass along more information when it becomes available.