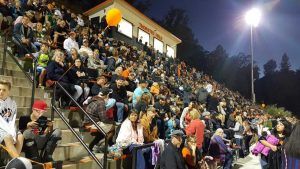 Sonora, CA — With the high school football regular season coming to a close last night, the teams are now looking ahead to the playoffs. The C.I.F. Selection Committee meets this afternoon to determine the the brackets. Last night the Summerville Bears defeated the Amador High Buffalos 35-10, Sonora defeated Bret Harte 70-15, and Calaveras defeated Linden, 49-0.

The Summerville Bears welcomed the Amador Buffalos’ in the regular season finale Friday night. On a rainy night up in Tuolumne, the Bears looked to advance to 8-2 as the Buffaloes looked to finish their ruckus ride of a season on a positive note.

Summerville put together an outstanding offensive performance on this night, scoring 35 points and holding the ball for which felt like the entire game. The Buffaloes touched the ball only six times offensively and could only manage 10 points. The points the Buffaloes scored were from a Justin Hurrea field goal and then an explosive 27 yard touchdown by Cody Shear.

Summerville though put up their 35 points with 21 of them unanswered until the 4th quarter, all through the power run game of Dominic Esqviuel. Esqviuel broke his own rushing record, over 215 yards and two touchdowns. Nick Veach, a sophomore, also punched in a touchdown and Jared Brick went in for a one yard dive touchdown as well. The run game has been outstanding all year and has really paved the way to the post season.

The flashy Esqviuel runs were a sight to see but one of the better moments of the night was when Jordy Craddock intercepted Elijah Randall’s pass to close out the season and open up the doors to the post season for the first time in four years.

Summerville wore nothing but smiles walking off the home turf and hopes to return to the New Thorstead field on Thursday night in Round One of the playoffs.

The Sonora High Wildcats continued their winning streak on Senior night at Dunleavy Field by scoring early and often in the first half.

On the opening kick-off, Sonora’s Evan Bearden scooped up the kick off, made a move to the sideline, got a block, and took off 65 yards for an opening score only nine seconds into the contest. With the extra point good, Sonora was up 7-0. The Wildcats Jacob Gookin took the ball on the Cats next offense possession and went 43 yards for a touchdown and with the extra point it was 14-0 Wildcats. After another Sonora defensive stop, the Cats offense again exerted its will and moved the ball down the field with Gookin adding another score, this time from six yards out and with the converted extra point Sonora was up halfway through the first quarter, 21-0. Calaveras got on the scoreboard with a beautifully thrown Ryan Kraft 40 yard pass that fell into the outstretched arms of Julian Gonzalez and the score was 21-7. The Wildcats Rico Sanchez added another score from five yards out and then Gookin scored for the third time in the first quarter, taking off on a 48 yard run. Bryan Wynn converted both extra points and the first quarter closed with the Wildcats up 35-7 over the Bullfrogs.

The second quarter was all Sonora as Jack Camara scored twice, once from seven yards and another time from 17 yards out. C.J. Castleman had a nifty 30 yard rush and Mike McKernon ended the second quarter scoring with a 25 yard score. The Wildcat defense forced two turnovers, once when Tristan Hagstrom put his shoulder on the ball and forced a fumble that the Cats were able to recover and the second coming on an Aki Loh interception that was precipitated by huge amounts of pressure on the Bret Harte quarterback by the Sonora defensive front. Bryan Wynn converted all four extra points of the second quarter and Sonora went into halftime of senior night up 63-7.

With a running clock due to the score and reserve players getting in the game, both teams were not able to score any points and the 3rd quarter ended with the same score as the second, Sonora 63, Bret Harte 7.

As the Sonora reserves got more comfortable out on the field and the nerves subsided, the offense was able to score again. Mike McKernon scored his second touchdown on a run that saw him bouncing off one defender and spinning away from another Bullfrog tackler in the matter of just a couple yards, yet was able to keep his feet from seven yards out before stumbling into the end zone. Bryan Wynn came in to convert his 10th extra point for a perfect night and after the math was done, Sonora was up 70-7. Bret Harte’s Javon Gilbert showed off his speed when he broke a run to the outside, turned on the afterburners, and went 85 yards down the sideline for a Bullfrog score. Bret Harte’s Silvia added the two point conversion and the score was 70-15. The clock would run out on the game and Sonora kept their winning streak alive, but also clinched another undefeated Mother Lode League Championship.