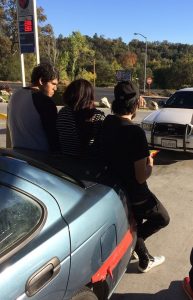 The Police Department received a call shortly before 4pm Monday about three people running through the emergency exit of the store with baskets filled with merchandise. They left the parking lot in a blue sedan and headed westbound on Mono Way. Acting Police Chief Turu Vanderwiel spotted a vehicle matching the description and followed it to the AM/PM mini-mart on Pesce Way. Vanderwiel made contact with the people inside and noticed that several boxes of merchandise were in the backseat of the car. A Rite Aid employee responded and positively identified the suspects as those that stole the items in the burglary. In addition, some of the merchandise was positively identified as being stolen from CVS earlier in the day. The items totaled over $1,000 in value.