A Scare For Motorists On HWY49 In Tuolumne County 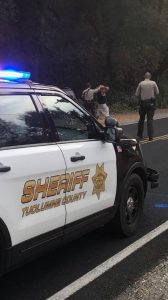 Tuolumne County, CA — After hearing scanner traffic Wednesday around 5 p.m. regarding a man walking along Highway 49 near Parrotts Ferry Road in the Sonora area with a possible pistol in his hand Clarke Broadcasting made inquiries to the Tuolumne County Sheriff’s Office.

Today Sgt. Andrea Benson tells us that dispatch received several calls from drivers reporting that same scenario. When deputies arrived on the scene they found a 42-year-old Sonora man with what appeared to be a hand gun. Sgt. Benson says he told deputies that his reason for having the firearm was to shoot rattlesnakes as he is afraid of snakes. A closer look at the weapon revealed it was a pellet gun.

Sgt. Benson cautions the public that the man’s encounter with deputies could have gone very differently if law enforcement officials made the call to treat the weapon — and incident — as a deadly situation.  She adds, “So-called fake guns can be fun to play with but can also pose a safety hazard and create fear and panic if used in public places.” She advises to avoid a dangerous confrontation by not showing imitation guns in public. “If you are carrying an imitation gun and are approached by law enforcement, place the gun on the ground and obey their instructions,” she emphasizes.

No additional weapons were found on the man, whose name is not being released as he was not arrested. The Sergeant notes that needless to say, due to the fear and panic it brought to residents and passing motorists, the man was advised not to walk around in public with such a realistic looking gun.