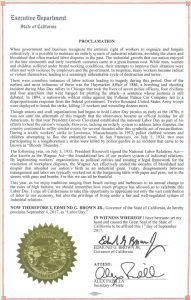 Sonora, CA — It is Labor Day, so many businesses and government offices are closed today, including courts, schools, banks and the post office.

Of note, the annual Labor Day Calaveras Community Band concert at Murphys Community Park, originally scheduled for late this afternoon, is cancelled due to the very smoky conditions in the region.

Governor Jerry Brown has issued a Labor Day Proclamation. You can read it below:

When government and business recognize the intrinsic right of workers to organize and bargain collectively, it is possible to maintain an orderly system of industrial relations, avoiding the chaos and bloodshed that often marked labor disputes in the past. The industrial growth that our nation enjoyed in the late nineteenth and early twentieth centuries came at a great human cost. While men, women and children suffered under brutal working conditions, their attempts to improve their situation were often met with violence by employers and the government. In response, many workers became radical or violent themselves, leading to a seemingly unbreakable cycle of destruction and terror.

There were countless instances of labor actions leading to tragedy during this period. One of the earliest and most infamous of these was the Haymarket Affair of 1886, a bombing and shooting incident during May Day rallies in Chicago that took the lives of seven police officers, four civilians and four anarchists that were hanged for plotting the attack–a sentence whose justness is still debated. In 1894, a nationwide wildcat strike against the Pullman Palace Car Company led to a disproportionate response from the federal government. Twelve thousand United States Army troops were deployed to break the strike, killing 13 workers and wounding dozens more.

Though unions and craft organizations had begun to hold Labor Day picnics as early as the 1870s, it was not until the aftermath of this tragedy that the observance became an official holiday for all Americans. In that year President Grover Cleveland established the national Labor Day as part of his efforts to heal the nation’s wounds. However, lacking an orderly system to address labor disputes, the country continued to suffer similar events for several decades after this symbolic act of reconciliation. During a textile workers’ strike in Lawrence, Massachusetts in 1912, police clubbed women and children attempting to flee the embattled town. In San Francisco, on July 5, 1934, two men participating in a longshoremen’s strike were killed by police gunfire in an incident that came to be known as “Bloody Thursday.”

The following year, on July 5, 1935, President Roosevelt signed the National Labor Relations Act–also known as the Wagner Act–the foundational law of our modern system of industrial relations. By legitimizing workers’ organizations as political entities and creating a legal framework for the resolution of workplace disputes, the Wagner Act effectively ended the decades of bloodshed and despair that attended our nation’s birth as an industrial giant. Today, disagreements between management and labor are typically worked out at the bargaining table with paper and pens, not in the streets with guns and bombs. For this we can all be thankful.

This year, as we enjoy traditions ranging from beach outings and barbecues to an annual change in the rules of high fashion, we should remember how much progress has allowed us to celebrate this Labor Day. I urge all Californians to take this opportunity to appreciate not only the vast contribution of labor to our economy, but also the privilege of living under a fair and well-regulated system of industrial relations.

NOW THEREFORE I, EDMUND G. BROWN JR., Governor of the State of California, do hereby proclaim September 4, 2017, as “Labor Day.”