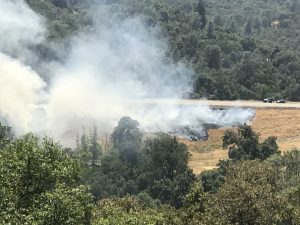 Update at 3:30 p.m.: CAL Fire investigators have determined what sparked a grass fire along Highway 108 in East Sonora around 2 p.m.

CAL Fire spokesperson Emily Kilgore details, “Firefighters have contained the fire to 3/4 of an acre. The cause has been determined by investigators to be from a catalytic converter. We remind you that  regular maintenance of your vehicles and equipment can prevent one less spark and also one less wildfire.”

It took air and ground resources just under an hour to put out a vegetation fire near the intersection of Mono Way on the bypass.  Crews will remain on scene mopping up for the next couple of hours, according to Kilgore.

A special thanks to our community news partners Christine Robbins and Sabrina Reese for sending in photos.

Update at 3 p.m.: CAL Fire spokesperson Emily Kilgore reports that the vegetation fire along Highway 108 in East Sonora near the Mono Way intersection on the bypass has been contained at one acre. Crews will remain on scene mopping up for the next couple of hours. Kilgore notes that what sparked the flames is under investigation.

Update at 2:35 p.m.: CAL Fire spokesperson Emily Kilgore reports that all aircraft have been called off the scene along with all incoming resources. The one acre fire is burning in grass along Highway 108 just south of  the Mono Way intersection on the bypass. The forward rate of spread has been stopped and no structures were threatened. Crews will continue to work on full containment and mopping up for several hours, according to Kilgore.

Original post at 2:12 p.m.: East Sonora, CA — Columbia aircraft and firefighters are battling a vegetation fire off of Highway 108 in East Sonora.

It is located near the Mono Way intersection on the bypass. CAL Fire spokesperson Emily Kilgore reports that the fire is one acre in size but crews have stopped the forward rate of spread. We’ll bring you more details as soon as they come into the news center.