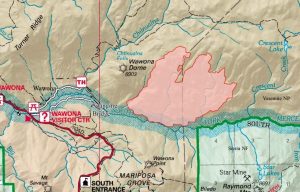 Update at 4:15 p.m.: Firefighters are making progress on the Yosemite National Park South Fork Fire near Wawona as they have attained five percent containment. The acreage grew overnight by 596 acres to 2,296. Park fire officials have announced a 6 p.m. meeting tonight at the Wawona Community Center located at 7925 Chilnualna Falls Road in Wawona.

Original post at 7:40 a.m.:  Yosemite, CA — The South Fork Fire burning near the community of Wawona in Yosemite National Park is up to 1,700 acres.

The 253 firefighters on scene continue to work towards building a containment line on the west edge of the fire in hopes of stopping it from spreading into Wawona. Once completed that line is completed, firefighters will shift to building a line on the south flank. Crews are trying to use natural barriers to help contain the blaze. Yesterday’s growth was described as “moderate creeping.” The official cause of the fire is still under investigation, but the National Park Service indicated that it could be lightning caused. It ignited on Sunday.