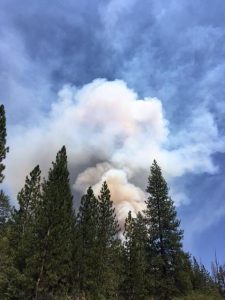 Wawona, CA — Yosemite National Park officials report that the South Fork Fire is now up to 1,613 acres and there is no containment.

148 firefighters are working to suppress the fire near the South Fork of the Merced River, approximately one mile upstream from Swinging Bridge. The fire is burning in an area of heavy tree mortality due to the bark beetle epidemic. Protecting the community of Wawona is a top priority, which is situated 1.5 miles east of the fire. Camp Wawona and homes on Chilnualna Falls Ridge remain under a voluntary evacuation advisory. Yosemite officials indicate that additional evacuation advisories or orders could be called within the next 24 hours. Within the next two days, fire crews hope to have a containment line along the west edge of the fire, and then continue to monitor for any spot fires. Within the next four days, firefighters hope to build a containment line along the south edge of the fire.

We’ll keep you updated as more information comes into the news center.

Click here to view a map of the South Fork Fire